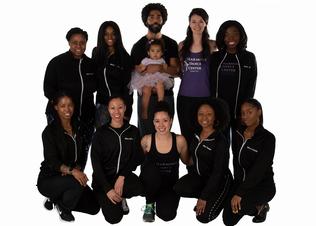 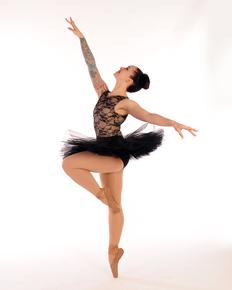 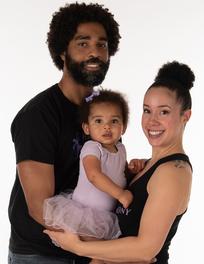 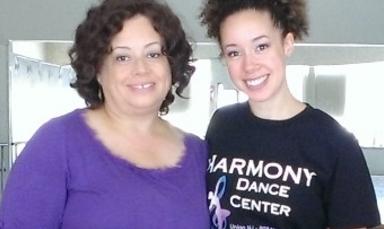 Miss Aaliyah began dancing at the age of 11, with her church's praise dance group.  She was a member of Marylawn Dance Ensemble from 2012-13 under the direction of Ms. Mayland.   While attending Essex County College, she was part of the Caribbean Club, which held performances, traveled throughout New Jersey participating in events including annual breast cancer walks.  Currently, Miss Aaliyah is currently studying at Felician University pursuing a degree in Social and Behavioral Sciences with a minor in Criminal Justice.

Miss Turia is the office manager and is also DeeDee's proud mother!  Turia graduated from Kean University with a B.A. in Elementary Education.  After having two children, she worked in the pharmaceutical and food industries for over 28 years, and still continues to do so today.  Turia's gift for voice and acting has been a blessing and true passion of hers.  She studied at the New Jersey School of Dramatic Arts and The Pit (People Improv. Theatre) and began performing with Triad Chamber Ensemble in 2001.  She also did vocal recording work at Media Sounds, The Record Plant, and Vangaurd Studios.

Mr. Don (A.K.A. Miss DeeDee's Husband) is an interdisciplinary artist, painter, sculptor, and graphic designer, with over a decade of professional experience.  His specialties include:  illustrations for album art and children's books, print work, web design, tattoo design and sculpting.  He also is well versed in digital art and computer software.  Mr. Don's educational experience includes William Patterson University and the Joe Kubert School of Cartoon and Graphic Art.

Miss DeeDee - DeeDee M. Woodard attended Rutgers University as a BFA Dance Major from 2000-2003.  She graduated from Montclair State University in 2010, where she earned her B.A. in Health Education and a minor in Dance.  She joined the faculty at Oxendine Dance in 2003, where she taught for 11 years before taking over the studio in 2014.  She began dancing at the age of 6 at Melody's Dance Studio in Brodheadsville, PA.  Her training includes The Academy of Classical Ballet under the direction of Donna Pyryt, The Joffery Ballet School, Briansky Saratoga Ballet School, and The Ailey School.  DeeDee was awarded a fellowship to study at The Ailey School in 1998 and a scholarship to attend the New Jersey Governor's School of the Arts for Dance on full scholarship in 1999.  She danced professionally with modern dance company Julia Ritter Performance Group from 2002-06, touring internationally to Prague (Czech Republic) at the Alfred de Dvore Theatre, and Toronto (Canada) performing at the "Toronto Fringe Festival of Independent Artists," and with Kathy Kroll's Dance & Paper Theatre.  Other performances include:  DanspaceProject at St. Mark's Church (NYC), Temple University (PA), Mannesquan Theater (NJ), Middlesex County Vo-Tech (NJ), Prallsville Mill (NJ), and White Wave Dance Space (NYC).  DeeDee has taught at various schools in New Jersey including:  South Orange-Maplewood School District, Clifton Public Schools, Marylawn of The Oranges, Hudson County Schools of Technology, Bette White Dance Center (Inspirational Dance), and Front & Center.  In addition, she has taught master classes in New York and Connecticut for National Association of Dance and Affiliated Artists (NADAA).  DeeDee is a member of the National Dance Education Organization (NDEO), and Dance New Jersey (DNJ). Miss DeeDee was the proud recipient of the National Black MBA Association of New Jersey's "2016 Community Leadership Award."  Miss DeeDee/Harmony Dance Center is a member of the Union Township Chamber of Commerce. She and husband, Don Woodard, welcomed their first childin October, 2017.

Miss Rebecca - Rebecca Cooney graduated in 2016 from Mason Gross School of the Arts at Rutgers University with a B.F.A. in Dance and minor in Psychology. She has worked with choreographers John Evans, Kim Gibilisco, Doug Elkins, Randy James and Keith Thompson. She has also had the pleasure of working with Michele Mossay, Luis Martinez and Carolyn Dorfman. Rebecca was a part of University DanceWorks at MGSA from 2014-2016.  Miss Rebecca has performed at The Rockette Alumnae Foundation-Luncheon, Prudential Center, various collegiate events such as American College Dance Association (ACDA) and other venues across the metropolitan area. Rebecca has completed her training in 2015 for the Polestar Pilates teacher training program affiliated with Rutgers University and is Pilates Method Alliance (PMA) Certified.

Miss Serenity - Serenity Simmons started dancing at the age of 4, studying at Creative Expressions and later Michelle Oxendine Dance Studio, where she studied with Miss DeeDee.  From 2005-2006 she served as Dance Captain for the UHS Performing Arts Company.  In 2008, she founded her own non-profit dance organization called "Contempo Dance Company".  The company held several dance productions, and performed at numerous charity events.  Miss Serenity is currently working toward her degree in Public Relations and Dance from Montclair State University.

Miss Tasia - Tasia Brown is a former student of Michelle Oxendine Dance Studio. She began dancing there at age three and continued until attending college at Kean University where she earned her her Bachelors Degree in Psychology in 2016.  She began training in commercial hip hop at Broadway Dance Center.  She later danced with the Unofficial New York Giants Dancers (now known as the Gotham City Cheerleaders). She was a group leader for Ailey Camp Newark Summer Camp in 2014.  She currently still trains at Broadway Dance Center and Ailey.

Miss T'Keyah is a graduate of Howard University with a Bachelor's Degree in Chemistry.  While at Howard, she was apart of a dance troupe for two years that performed at many Howard events. She trained at Michelle Oxendine Dance Studio since the age of two and had a tap solo at the age of four.  She was on the competition team and received many awards at the competitions.  She attended the Alvin Ailey Dance School in New York City for three years and studied a variety of different dance styles.